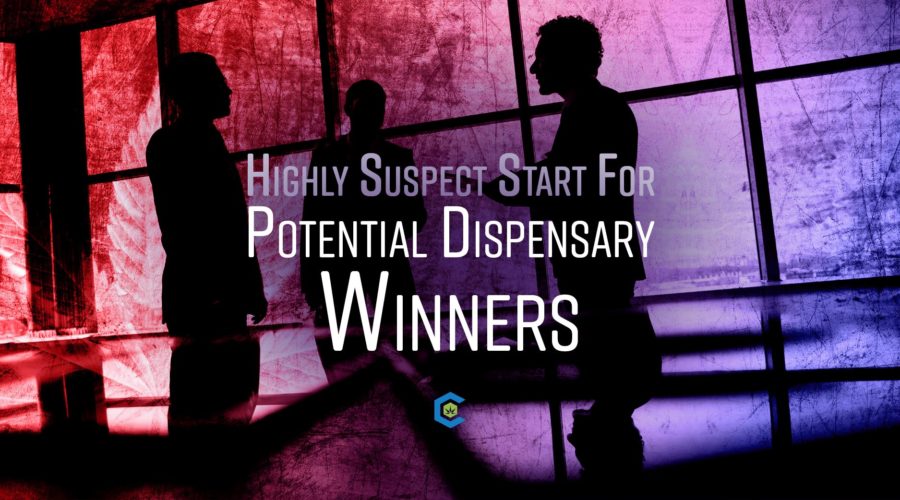 State of Illinois Announces Lottery Picks for Potential Dispensary Winners, Off to a Highly Suspect Start

On Thursday, Sept. 3, 2020, the Illinois Department of Financial and Professional Regulation (IDFPR), announced a lottery for cannabis dispensary applicant finalists, which is expected to take place in late September.

The lottery announcement includes the names of eligible applicants by region after a scoring process conducted by KPMG, in a no-bid contract worth over 7 million dollars, which resulted in “tied applicants” across the state.

While all of the potential license winners are social equity applicants, the announcement has received a mix of both praise and criticism.

Below is the Full Note About the Tie-Breaker Lottery Issued By Illinois:

“Editor’s Note: At the conclusion of the scoring process, there were “tied applicants” in each of the seventeen Illinois Bureau of Labor Statistics regions (“BLS region”). Their names are listed below by region. The number next to the name of each BLS region name represents the number of conditional licenses that will be awarded in that BLS region.

The full list of tie-breaker applicants can be viewed here.

Mixed Reactions to the Announcement

On the heels of IDFPR’s lottery announcement, Illinois cannabis industry newsletter Grown In published a detailed article covering the mixed reactions to the state’s decision.

On one hand, Toi Hutchinson, Senior Advisor to the Governor on Cannabis Control, praised the moment as a milestone in social equity for cannabis.

Meanwhile others are wondering why only 21 applicants out of more than 700 groups were chosen as tie-breaking finalists for the 75 licenses while many other hopeful applicants were left in the dark with some even planning to file lawsuits.

“A close examination of the applicants that made it to the tiebreaking phase, calls Hutchinson’s claim of social equity into question, since so many winners are affiliated with existing major cannabis companies or well-known business leaders,” Grown In’s Mike Fourcher writes.

Fourcher goes on to detail some of the finalists, raising important questions through the social equity lens.

What’s more, finalists being placed in a lottery scenario potentially brings the spirit of social equity into question if all will be left up to chance.

A majority of the applicants were reportedly both surprised and dismayed to see the outcome of this first round due to the small number of potential winners who accounted for a majority of the winning applications that qualify for the lottery.

A careful examination of the eligible license lottery finalists reveals only a handful of companies repeatedly winning in a majority of all available regions with perfect scores.

The Chicago Suntimes reports that the 21 qualifying applicants for the 75 new licenses were informed of their opportunity to participate in the hyper-exclusive opportunity to win a provisional dispensary license.

Since these companies will now have the opportunity to participate in the lottery process, some companies could very well win multiple licenses.

In searching state records further, we found that the following groups are all connected to a listed company called ACFB Incorporated, which account for a majority of the lottery participants across every BLS region listed.

While the listed company itself does not provide enough context of ownership, it would be important to see and understand who the principal officers are listed for all applying organizations.

According to sources familiar with license transactions, licenses in this round carry an average estimated pre-money valuation to the tune of $5 million, or higher, depending on a variety of factors, including location and earnings potential.

“Dear Conditional Adult Use Dispensing Organization License Applicant Point of Contact: Thank you for participating in the application process.

This email is to let you know that the Illinois Department of Financial and Professional Regulation has posted the list of ‘tied applicants’ for each region who may qualify to participate in the upcoming lottery to be awarded a Conditional Adult Use Dispensing Organization License (‘Conditional License’).

There were no individual winners in any region, so all 75 conditional licenses will be determined by lottery. The link for the list of tied applicants can be found here. In each region, there were several applicants who received the maximum possible score of 252 points.

If you are not on the list, your application did not receive that number of points, you do not qualify to participate in the lottery, and you will not be awarded a Conditional License. Thank you again for your participation in the process.”

While a disparity test is to follow, it is unclear how many social equity applicants will be able to enter for a second round next year, due to the ongoing struggles faced during the Coronavirus pandemic, which delayed the application process and created a financial strain that many won’t recover from.

According to the special report by Grown in, The details of the tiebreaker applicants are often not what you would expect from a social equity applicant.

For a detailed list of the lottery participants, check out this detailed sheet from Grown In.

Other potential winners on the list include companies associated with

In a Sun Times article published soon after, Michael Malcom – a Morgan Park real estate broker whose applications were denied, called the process “insane,” referencing the limited number of possible entrants in the lottery competition.

The Social Equity Lawsuits Have Begun

Chicago Business has already reported two separate lawsuits against the state in response to their latest dispensary lottery pick announcement. These teams, both claim they should have qualified to be among the tied applicants, given that they not only met the social equity requirement but the veteran status as well, which awards an additional 5 bonus points on an application.

Commentators of the program speculate that the need to require a veteran status in order to obtain a perfect score goes against the very purpose of trying to empower those affected by the war on drugs, versus those who served in the military. Both are reportedly needed, although in this case, applicants claim there should have been a separate process that didn’t disqualify those who were in fact considered to be true social equity applicants.

Since the rules of the program do not allow for administrative review, the only option social equity applicants have for recourse is to sue.

Next Steps in the Process

According to the Chicago Sun Times, once all of the state’s licenses have been issued, Hutchinson said the state will conduct a disparity study “to better understand how this new industry is working and correct any structural challenges to equity as we move forward in issuing hundreds of additional licenses and further developing this new industry.”

However, in a separate piece featured by the Chicago Tribune, applicants who did not make the cut, along with black lawmakers are calling on Gov. J.B. Pritzker to halt the lottery.

On the morning of September 5th, The Medical Cannabis Community team interviewed State Representative, and member of the Black Caucus, La Shawn Ford to understand the series of events as they are unfolding, and to get his perspective on what the next steps of social equity in Illinois could look like if the state took the right steps to course correct the program before it failed.

Cannabis industry lobbyist and consultant Mark Peysakhovich suggested and echoed some of the advice referenced in the interview with State Rep. La Shawn, such as

2.  Hitting the brakes on the lottery until the state could investigate the already highly suspect process

3. Regrouping, recognizing, and reasserting the fact that the grading did not meet the intention and spirit of the law

Looking Ahead to the Future of Illinois Cannabis

It’s not all bad however.

A few notable members from Chicago NORML, including Executive Director, Edie Moore, along with board members, Kiana Hughes, and Donte Townsend, were among the list of lottery participants. They were not selected across every single BLS region however, compared to larger entities in the running. As long-time advocates and true supporters of social equity, they are among the few applicants listed who embody the spirit and intention of the program. Unfortunately, like all other social equity applicants, their fate is left up to the mercy of the state’s lottery system.

Separate to Edie’s team, there are a number of applicants who made it into the lottery who are very well social equity applicants. To date, not all potential winners have been identified, and as stated in Chicago NORML’s monthly general virtual meetings, some social equity applicants are still reluctant to make any announcements because they haven’t technically won anything except for the opportunity to participate in a lottery.

The silver lining in all of this, according to Senior Cannabis Advisor, Toi Hutchinson, is that the state wrote into the law that it can award up to 425 more licenses after the first 75. Contingent upon the results of the disparity study, nationally, and in Illinois, the state can figure out what to do to make the program better and more equitable.

Given the way the program has played out, it is unclear how many social equity applicants will be able to enter for a second round next year due to the ongoing struggles faced during the Coronavirus pandemic, which delayed the application process and created a financial strain from which many may never recover.

With dispensary licenses announced, craft grow, infuser, and transportation are likely to follow any day now. Who will win in the long run? Only time will tell.